Heritage Day should be more than beer, boerewors and braaivleis. At least those were the thoughts of the people who chose to spend the day exploring our diverse religious heritage.

Although there has been an attempt to rebrand Heritage Day as National Braai Day with Archbishop Tutu in an apron as its patron, this culinary particularity demeans a holiday meant to help us welcome our diversity in a nation that belongs to all its people but did not always.

On a level more in keeping with the original intent of the day, the Cape Town Interfaith Initiative (CTII) each year arranges a Heritage Day bus tour to visit places of worship of different religious community.  This year the tour consisting of people from nine different faith communities visited the South Peninsula where they were immersed in a heritage rich in pain and suffering underpinned by a past heritage of intolerance. 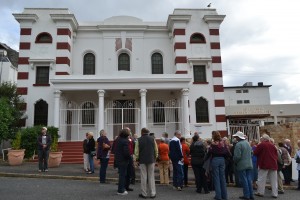 First stop was the Muizenberg Synagogue built 90 years ago. Sadly there has been a dramatic global increase in antisemitism to which South Africa has not been immune. Ridiculous as it sounds, South Africa’s Jews were given until 7 August to leave the country by Tony Ehrenreich who also threatened them with physical harm if people were killed 9 000km away by Israelis. This, despite our constitution giving everyone the right to freedom of religion, belief and opinion. Because the Jewish New Year would begin that evening, the police were taking no chances and did not want anyone to enter the building, so the group stood on the steps outside where the Synagogue Chairman addresses them and told them about the synagogue and the festival whose service included universal prayers for peace, health and prosperity.

Prejudice unfortunately is part of our heritage.

From there they walked up the road to a beautifully maintained and painted Muslim kramat at the eighteenth century grave of Sayed Abdul Aziz RA), an escaped slave where they were told the history of the site and the services conducted there.

Slavery is also part of our heritage.

Next stop was the St Francis Church, built in 1837 after winter storms had destroyed the original building (erected in 1814). The church has stone carvings on the walls erected by shipmates to commemorate deceased sailors and beautiful stained glass windows, one of which portrayed an African St Frances surrounded by African animals like a lion and a cheetah. 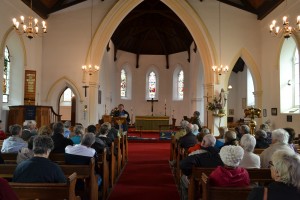 In 1967 the church lost 70% of its members – worshippers whose parents, grandparents and great grandparents had been baptised, married and buried by the church, the oldest Anglican parish in South Africa, 200 years old this year. People had been living in Simons Town at least since 1687, when Governor Simon van der Stel visited the area. In 1743 it became the official winter anchorage for the Dutch East Indian Company’s ships, and a magazine, hospital, barracks, a residence for the Governor, a bakery, a butchery, a carpenter’s shop and a smithy soon followed, along with the builders and bakers and candlestick makers, both slaves and freeborn, required for the functioning of the town. And they lived there until September 1967, when Simons Town was declared a white group area. Not even Governor Simon van der Stel would have been allowed to stay there – his grandmother, Monica of the coast of Goa, had been an Indian slave.

At a stroke of a pen, St Francis lost most of his congregation and Simonstown its residents.

First to be removed under the Group Areas Act were black people. On two Sundays army trucks arrived, loaded up the women and children, throwing their possessions alongside them, When their men folk arrived home from work at the docks, they found slips of paper on their doors giving the address in Guguletu where they would find their families,

With that sort of heritage, how significant is a back-yard braai?

So, on Heritage Day the former residents of Simonstown return. From Ocean View and Retreat, from Heath field and Noordhoek, from all over the Peninsula,they return to Simonstown for the annual wreath-laying and commemoration of those forced removals, an event organised by the the Simon’s Town Museum and the Simon’s Town Phoenix Committee.  The CTII bus group watched as bus after bus arrived from which descended white-haired ladies stooped over with arthritis, old men on sticks assisted by their grandchildren. They had gathered to take part in a procession to Jubilee Square, some holding street signs with the name of the street where they had lived. Apartheid had come and apartheid had gone, but they were still here. Seven thousand people had been evicted and they had not forgotten the results of the Group Areas Act.

From this reminder of the painful heritage of apartheid the CTII group went to the Heritage Museum. This commemorates the Forced Removals of the Muslim community who had lived there since the Eighteenth century. Situated in the house of the Amlays the last Muslim family to be forcibly removed and the first to return in 1995, the Heritage Museum, initiated by the Noorul Islam Historical Society, contains photographs from the 1800s to the present. On show are bridal gowns, cooking utensils, an Eid table and a Hadj room. The CTII group visited the mosque, in perfect condition, kept going by a handful of Muslim men.

The madrassah is empty – gone are all the children whose voices used to fill it. The Muslim families who lived in the houses in the streets alongside the mosque are gone and there is great bitterness in the community.Their houses have not been returned. Abandonedhouses fell into disrepair and were bulldozed flat. Compensation when offered is totally inadequate.

Last stop was the Simonstown Town Hall where the Hare Krishna provided a tasty ayurvedic vegetarian lunch followed by a Buddhist healing meditation where the group was told to leave behind bitterness, anger, jealousy, suffering, as these could be internalised, and to think of the miracle of one’s body and one’s life. This was accompanied by the hypnotic music of reverberating brass bowls and a large gong.

The CTII has taken the legacy of interfaith solidarity forged during the anti-apartheid era into the post-apartheid era. Trips like this encourage transformation and acceptance of religious diversity and equality. This Heritage Day we could see from where we had come. We could rejoice in what we are now – a nation that belongs to all its people, where diversity of culture and beliefs can be celebrated and where samoosas. dal and rotis are as much a part of our heritage as a braai.